This document will cover anything you need to do after all the teams, judges, and rooms are registered and checked in.

For each round after round 1, you need to enter results, make sure you have enough judges, and pair the next round. Having multiple people logged in and entering result information and checking that information makes your tournament run significantly better (faster and more accurate). It is highly advised that you do this.

After pairing a round, you will mostly be dealing with the current round’s pairing view located at /pairings/status/. This is kind of the control center for the whole tournament, and you can change pretty much anything from this view. The areas of importance are shown below:

To pair a round, navigate to /pairings/status/ and hit “Prepare Next Round”. For any round after round 1, make sure that all results have been entered. After that, you should see this page:

This signals that it is safe to pair the round. Backups before and after the pairing will automatically be created for you and labeled with the round number in case you need to restore from backups due to a pairing error.

Afterwards, hit the “Assign Judges” button to pair judges into the rounds.

MIT-TAB supports the concept of “backups” which allow you to create full backups of the state of your tournament at any given moment. Treat your tournament like a final paper: save early, and save often.

You will automatically get backups before and after each pairing event, labeled with the round number. If you manually backup a timestamp will be appended to the name so that you can tell which is which. Eventually, we plan to support arbitrary naming, but that is not ready yet.

NOTE: You may be logged out after restoring from a back-up. The username/password is still the same.

If something went wrong in the pairings, you may want to pair the round again. In order to do this, all you have to do is restore from the before pairing back-up and then pair the round as described above

The find the back-up to restore from, go to “Backups” > “View Backups” and click on the one with the name round_x_before_pairing.db, where x is the round number that you want to re-pair.

Throughout a tournament, you may have to remove a room, drop a team, etc. There used to be a delete button, but deleting teams/rooms/judges can potentially delete results from rounds that occurred, so that button was removed.

If you want to delete an entry (rather than just checking it out):

NOTE: You will never have to remove a debater if there is still another debater on the team. Just enter the results as an iron-person round.

To remove a team, simply uncheck the “Checked in” checkbox at the bottom of the team’s detail page. Simply re-check this to add them back in

To remove a judge, uncheck the “Checked in for Round _” checkbox for each round that you want to check them out for. 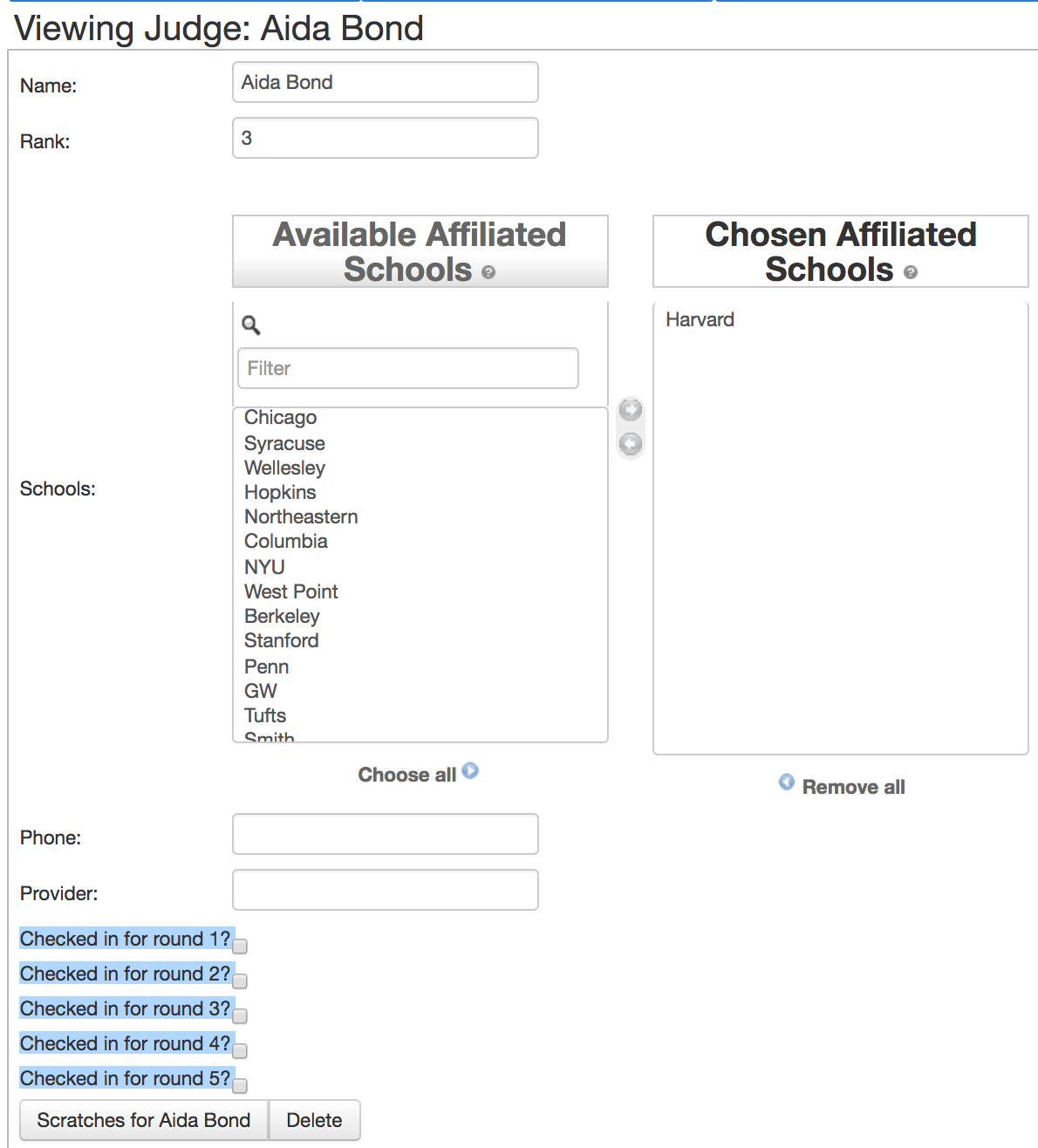 To remove a room, un check it in for the given round. You must have enough checked in rooms for this to work.